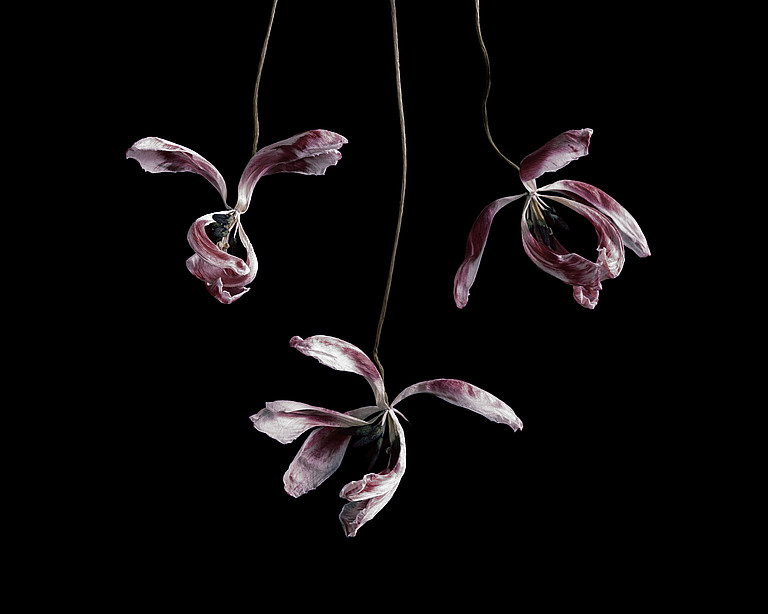 The long awaited moment arrives: I show my slightly different and analog Multimedia-Installation «This Sense of Wonder» at the Gallery Christophe Guye in Zurich, next to new flower still lives and light boxes.
The solo show opens on August 25 and closes on October 29, 2016.
Opening hours of the gallery: Monday to Friday 10am to 6pm, Saturday 11am bis 4pm
Galerie Christophe Guye
Dufourstrasse 31
8008 Zürich
http://christopheguye.com/

I am happy to present you the wonderful text about the works written by Dominique von Burg:
«Only rarely have images of decline and decay so mesmerized us with their fascination and terror. Damaged butterflies and beetles as well as the faces of younger and older people on whom life has left its mark emerge out of a dark, Caravaggesque background. With their enormous presence and their staring eyes directed towards the viewer, they seem to demand a dialogue. Wilted or almost withered flowers in vases and stuffed animals represent exemplary memento mori motifs.  These extraordinary photographs shot with an analogue camera depict simple motifs or scenes, which Brigitte Lustenberger (b.1969 in Zurich) has used chiaroscuro effects and sometimes theatrical compositional devices to stage in a highly aesthetic manner. They are presented as printed images, in lightboxes or as projected slides and they also testify to the artist’s interest in the medium itself, its history and the ambivalence between the technical device and the subjective image. The photographer deals with the concept of the gaze, for example, through the sparingly arranged images, which stimulate viewers to from associations. She steers her audience’s gaze in a particular direction, simultaneously charging the image with meaning, for example, when a pregnant woman looks angrily and perplexedly into a corner, thus providing an ideal object for our projections. The Pictorialist-like impression and staging of Brigitte Lustenberger’s photographs recall the framed video images of Gabriella Gerosa, who has brought new life to numerous still lifes, genre paintings and interiors created in the European tradition and composed in the manner of the Old Masters. This impression is intensified through her always stationary camerawork. Time seems to stand still and a dream-like atmosphere emerges, unfolding a suggestive power whose strength is comparable to that familiar from Lustenberger’s photographs.
With her memento mori images, Brigitte Lustenberger seeks to come to grips with the mystery of time. It is well known that its personification, Chronos, devours all of his children – in the sense that everything is lost and disappears in the dark recesses of time. Here, Zeus forms an exception as a representative of power whose myth could be interpreted in the sense that those who gain power over themselves, that is, over their shortcomings, also gain power over time. The task is to tear the essence from the clutches of time and, in this way, to arrive at the corresponding experiences or, otherwise, to be swallowed up by Chronos. By contrast the self-aware human being encounters Chronos in the form of a wise old man who transforms time into a path leading to himself. Considered in the light of this myth, Brigitte Lustenberger’s photographic works show the artist occupied with the halting of time and death, on the one hand, and striving to perpetuate vitality in the captured image, on the other. Between these two semantic dimensions, Brigitte Lustenberger permits us to trace down an equally familiar and foreign world full of intimations and riddles.»   Dominique von Burg, July 2016