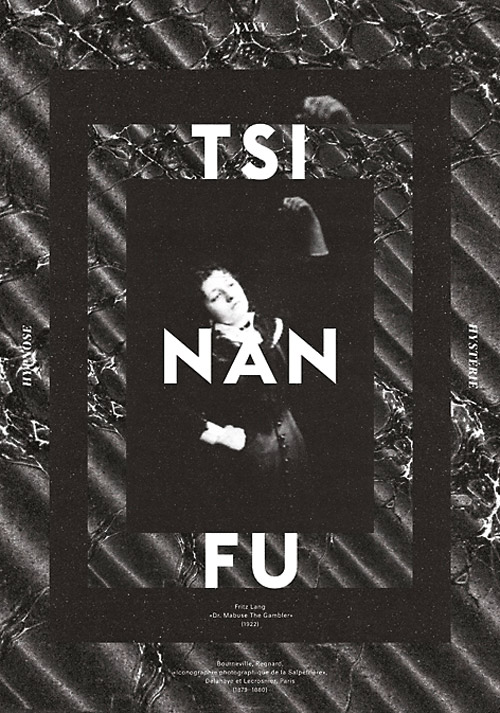 Adeline Mollard's poster TSI-NAN-FU is a free comment about how the early film of 1900 was fascinated by hypnosis and its representation and how this practice can be considered as a metaphor for the film medium itself.

Brigitte Lustenberger's Remake of Adeline Mollard's poster is a photograph. Four male hands grab a woman and determine the woman's movments. The artist mentions about her work: Inspiration were the 1922 film «Dr. Mabuse, The Gambler» by Fritz Land and a photo by Paul Regnard from the collection «Iconographie photographique de la Salpêtrière», a study of hysteria by Dr. Jean-Martin Charcot in the years 1979/1880. The common denominator is hypnosis for his evil schemes by imposing  his will on the hypnotised person. Dr. Charcot uses hypnosis to prompt hysterical attacks in women, for example at his Tuesday lectures before a curious and/or specialist audience in the famous «Leçons du mardi». The world sequence TSI NAN FU appears in Land's silent film when Dr. Mabuse is exerting all the power he can summon to hypnotise his adversary, State Attorney von Wenk.